"Travel makes you modest. You see what a tiny space you occupy in the world." - Gustav Flaubert

1. Apply, Reapply, Hat, Turtleneck, Shield, Whatever You Gotta Do... As Long As You Have Sunscreen!

I'm serious... I am one of the Millennials who thinks they are invincible so I never wear sunscreen. Well, until I went to Thailand and realized that the UV is 11 there and the second I walked outside I could smell my skin burning. I used SPF 30 and still took advantage of tanning extremely quickly! However, I had to reapply every hour or so. This is no joke: one girl on my tour got a second degree burn on her leg. It turned purple. She had to go to the hospital and get medicinal shots. And to make matters worse, she had to stay inside for two days!

2. You Will Never Have to Worry About Walking Out of the Bathroom with Toilet Paper on the Bottom of Your Shoe

Pack endless amounts of tissue packs! The majority of bathrooms do not have toilet paper. Some of them have hoses. Yes, hoses. Everything you are thinking when reading this... every emotion... it's true. Please do everyone a favor and just take my advice.

3. Think Twice About a Malaria Vaccination?

I brought Deet bug spray in a travel size. Everyone warned me about the bugs in Chiang Mai. So, logically, that's where I used it. However, when I got to the islands, I was eaten alive and had no joke, 20+ bug bits all over my legs. Those little demons pop out of no where and prey on American blood, I'm telling you! Lavender and lemongrass oil are natural repellents and Burt's Bees has a decent repellent that I also used. It applies thick so beware of feeling slightly oily.

4. That Feeling You Get in Your Stomach When You See Food... And Not the Good Kind...

Imodium, Charcoal, and Pepto Bismol will be your best friends if you are daring enough to eat the street food. I watched a lady decapitate a live catfish, blood splattered all over her body, where she then proceeded to attempt to sell it to me. Maybe I didn't get the full cultural immersion, but I'll pass as that really set my stomach off. The street food can be extremely unsanitary. They often leave food out for hours and don't use gloves when cooking. I often was disappointed with my overall meals in the country as they were bland and unseasoned. The peppers, however, were out of this world spicy! Beware. Also be careful of the produce. If you get the chance to visit Koh Samui, visit Coco Tams! Best pizza and drinks in the most picturesque setting on the beach. I'm talking total Pinterest, bean bags on the sand with an incredible fire show.

The majority of markets allow you to bargain. The secret is to bargain less than half of what their original offer is. Take it from someone who learned pretty quickly after getting scammed for paying US $30 worth for one pair of knock off Ray-Bans. If you want the best deals, souvenirs are cheaper on the mainland (Bangkok & Chiang Mai) compared to the islands where the prices are significantly higher.

Don't drink the tap water. Drink only bottled water. Make sure that when you open your water bottle, you hear the 'click' noise breaking the seal. Water often contains diseases. If you're staying at a decent resort, then brushing your teeth with the sink water should be fine. In several villages I went to, there would be pipes in waterfalls filtering water to homes.

At the end of the day, this is a Third World Country. The luxuries are not the same. The power often goes out. You walk down the street with the congested power lines, and physically hear the sizzling of short circuits. The buildings, the majority of the time, do not have walls-- they are left open (shack like). It made me appreciate simple safety structures: things I never even paid attention to, rather, just expected. Many houses were in dangerous conditions. For example, along the river in Bangkok, there would be homes that were falling into the water, yet still inhabited by people. This was common throughout the islands as well.

Forget the idea of hauling a yellow curb along the side of the road. In Thailand, there are taxis all over the main roads and come in different forms. Some seats are in the bed of a truck, others are found in the legendary 'tuk tuks', and then, there are open bus type cars. The drivers usually want to fill the taxi with as many people as possible so sometimes you have to wait awhile for them to gather others. Do not pay before you get into the car-- pay after. Sometimes, they try to scam you. It is also common for the driver to stop in the middle of your ride, at the gas station, or side of the road to pick up others, or make phone calls. Sounds sketchy... I know. If you are headed somewhere outside of the main hubs, ask the driver for their phone number so you can call them when you need a taxi to be picked up. 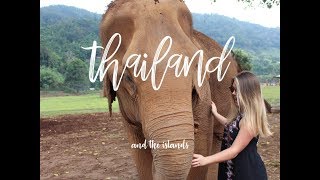